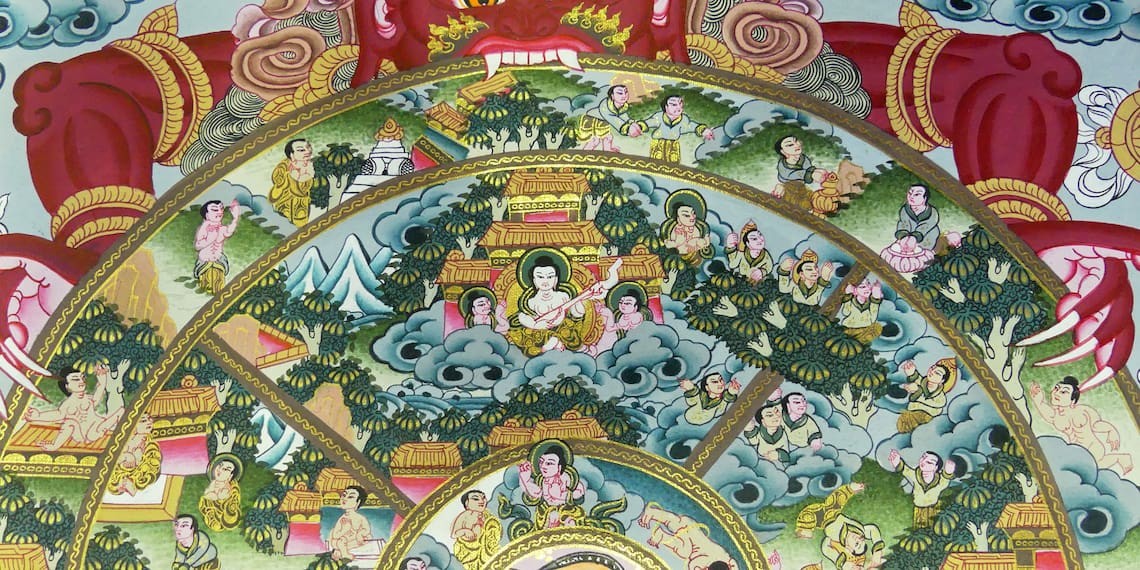 The Wheel of life

To describe the complexity of the wheel of life isn’t easy but to simplify, the wheel of life represents the cycle of our conditioned lives that repeat themselves all the time, unless one finds a way to free oneself, see the truth as it is, and thus reach the nirvana.

This teaching comes from Buddha who when he reached the awakening under the Bodhi tree, has a vision of the human existence and rewrote it under the shape of the wheel of life.

The wheel of life description

The first circle of the wheel of life

The wheel of life, formed by four circles, turns around the hub wheel in its centre fed by the 3 poisons of the existence: ignorance, linking and hating represented, respectively, by a pig, a cock and a snake. 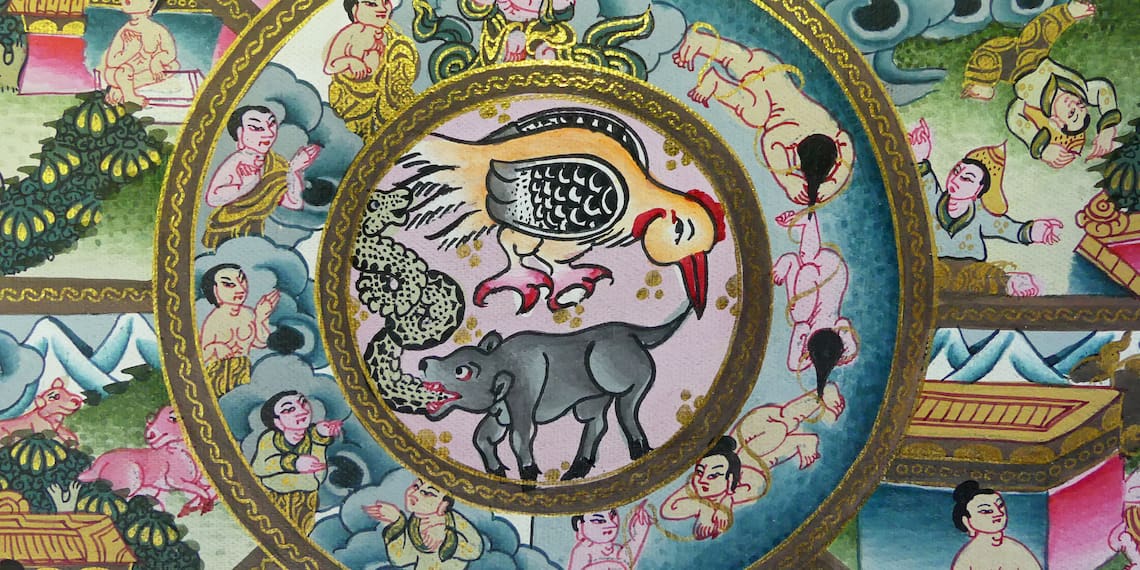 Surrounding the wheel hub, one can find another circle divided vertically in two halves, one white and the other one black. In each half are men and women. The people of the white side look like they are very happy as they have happy faces.  The people from the black side are falling headfirst with a look of stress and terror. This second circle represents the karma with various states of good or less good between which people move towards according to their acts. 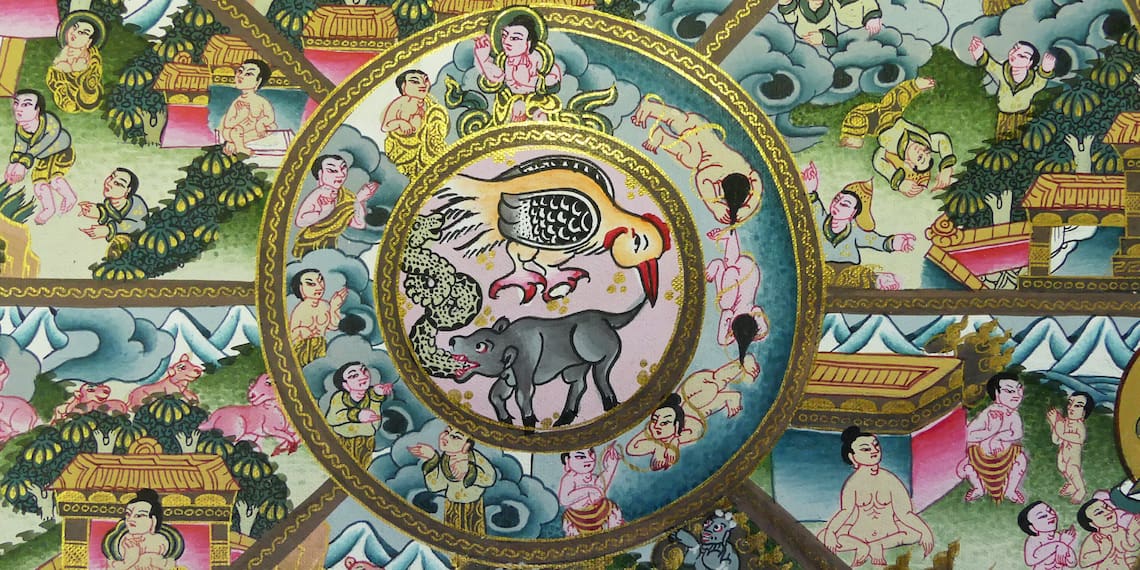 The next circle of the wheel is by far the broadest. It is divided into six sections. In each segment, a world is represented where each section can be seen as a state of mind or as a level of conscience. In the higher segment we can always see the Gods. They are living in a marvellous palace. They are enjoying different kinds of delights. For them, existence is as a wonderful dream.

Then, when you turn in this circle clockwise we can see the Titans. The Titans live in a hostile and jealous state of mind all the time. They wear armour and hold weapons. They struggle for the possession of the fruits of the wish-fulfilling tree.

In the next segment, we can see the hungry spirits. Below we can see tormented creatures. Afterwards, we see various animal species. We notice that they always come in pairs, male and female, and they are all looking for food.

In the last segment, we see human beings, houses and fields. They are ploughing, sowing and harvesting. So these are the six segments of this circle of the wheel that constitute six worlds or six kinds of states of conscience. The inhabitants of these worlds don’t stay in them forever. They disappear from a world and appear in another. Even the Gods, though they stay a very long time in their world, disappear and appear again elsewhere. 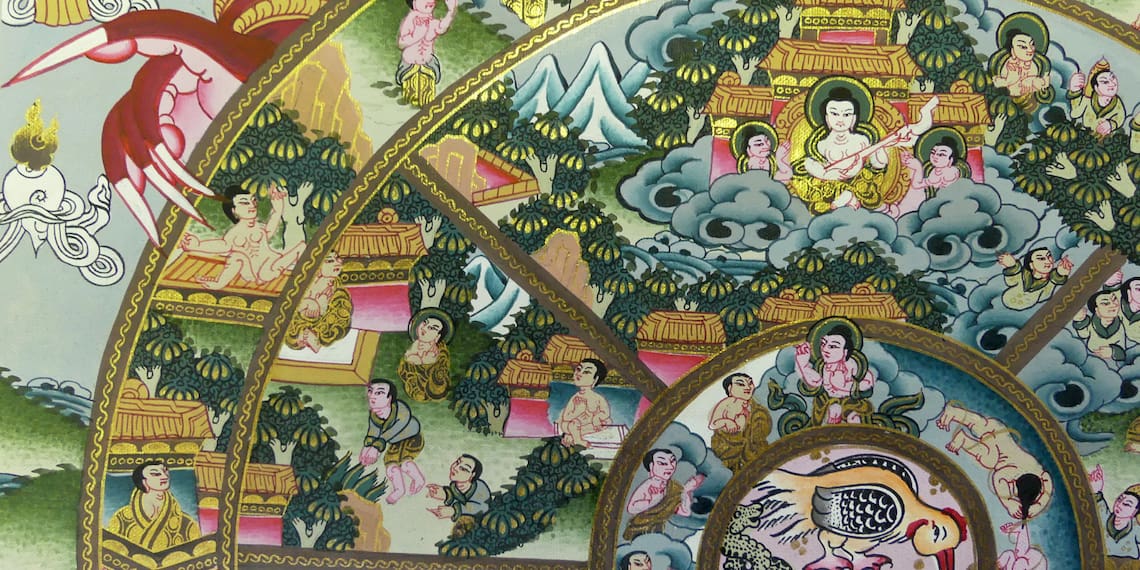 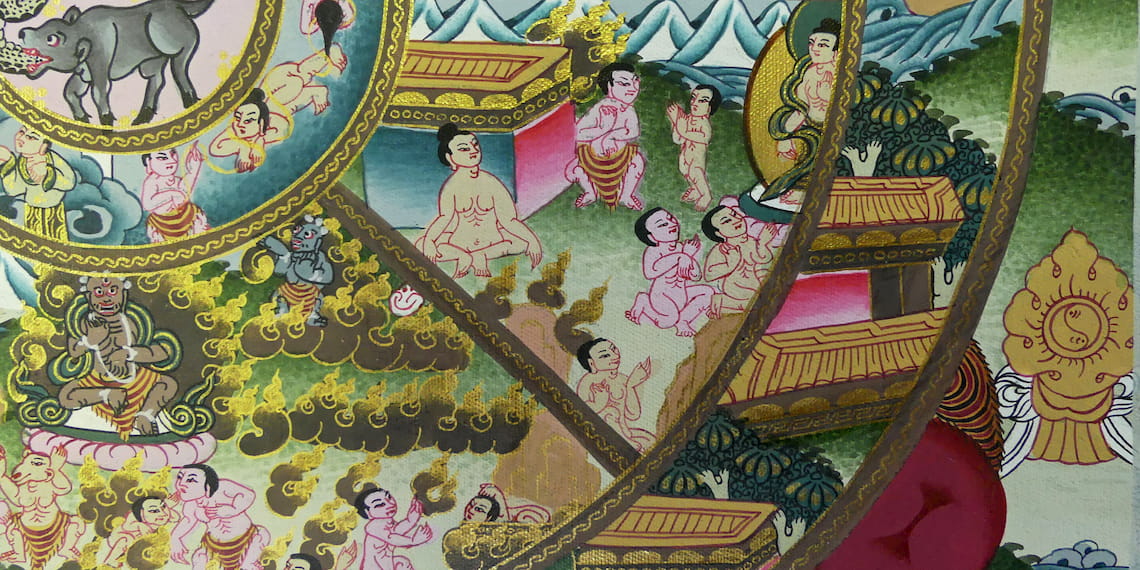 The last circle of the wheel is divided into 12 segments. These 12 scenes represent the twelve interdependent links (forming a cyclical sequence) keeping man in Samsara (the rebirth cycle in which the beings, have not yet reached the awakening, are taken). Clockwise and starting at the top, first we can see a blind man (initial ignorance), a potter with a potter’s wheel and pots (karmique training), a monkey climbing a blossoming tree (consciousness), a boat with passengers (the name and the shape), a house with six windows, to represent the six senses (the base of knowledge), a man and a woman embracing (representing contact), a man with an arrow in his eye (feeling), a man drinking (thirst), a man harvesting the fruit of a tree (seizure), a pregnant woman (fate), a woman giving birth (birth), a man carrying a corpse to the place of cremation (old age and death).

The path to Nirvana

But there’s something more. Above the wheel, there’s a Buddha out of samsara, who points the finger to the path which leads to the cessation of suffering and full liberation, the famous Nirvana.

This path, sometimes called the middle path, avoids the two extremes that are on one hand the pursuit of happiness in the dependence of pleasures of the senses and on the other hand the pursuit of the liberation into the practice of asceticism and mortification.

Buddha, after experiencing these two extreme, thus discovered the Noble path which leads to Nirvana and aims to show it to us. So here is what the Buddha saw, sitting under the Bodhi tree. It’s his vision of human life, conveyed by concepts and symbols.

The meaning of his vision is very clear. It’s a vision of opportunities and alternatives. We can either, keep turning passively on the wheel, or follow the path, climb the ladder and reach the enlightenment. Our fate lies in our hands. 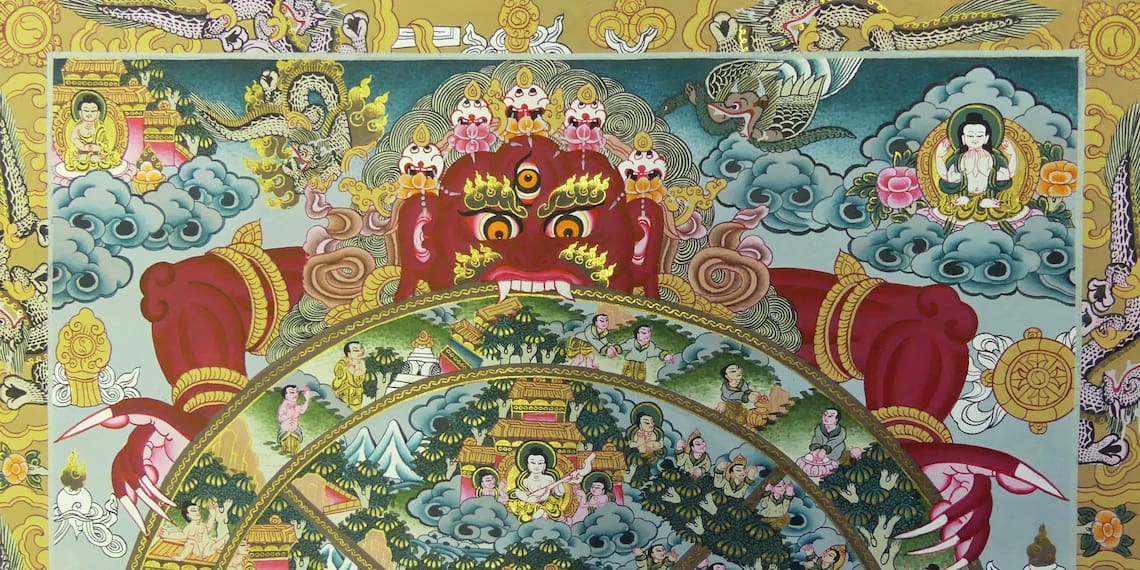