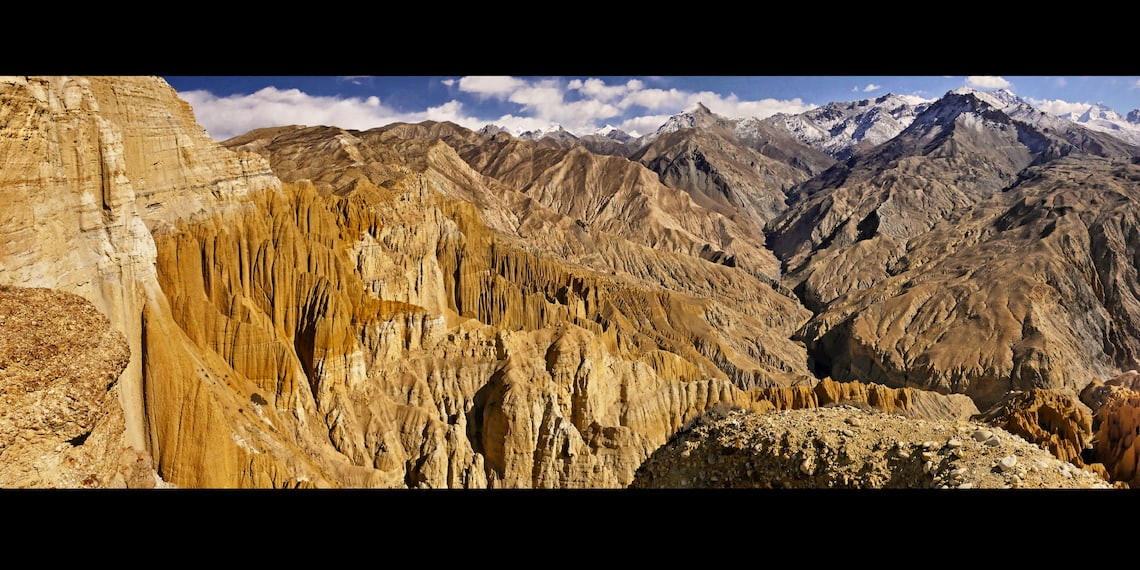 Trek in Nepal: the Mustang area

The Mustang is a small Tibetan enclave in the Nepalese territory which is nothing like the rest of the country. Here everything is barren but the river which crossed this Nepalese region from North to South allowed men to settle down in it. The Mustang has been inaccessible to foreigners for many years. This ancient kingdom was only visited by rare explorers and that’s probably why its character is so strong and authentic. The Mustang is accessible now to a limited number of foreign visitors on condition they pay fifty dollars per day. But, believe me the beauty of this part of the world is easily worth the 500 dollars fee. The twelve days trek will include climbing the Kali Gandaki straight to Lo Manthang (the capital) then going down the other side to the starting point Jomosom. 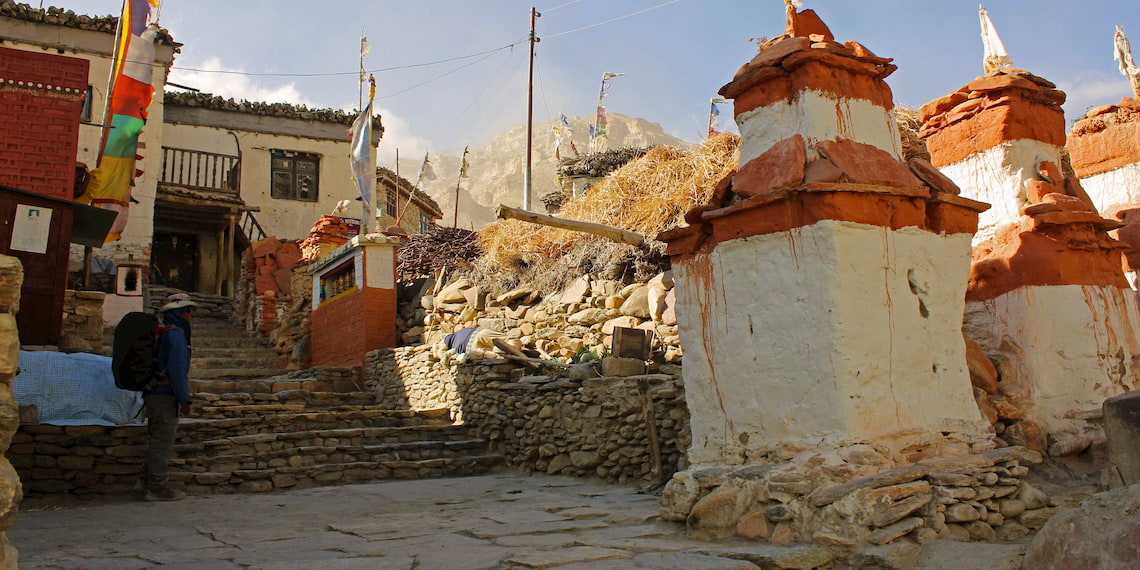 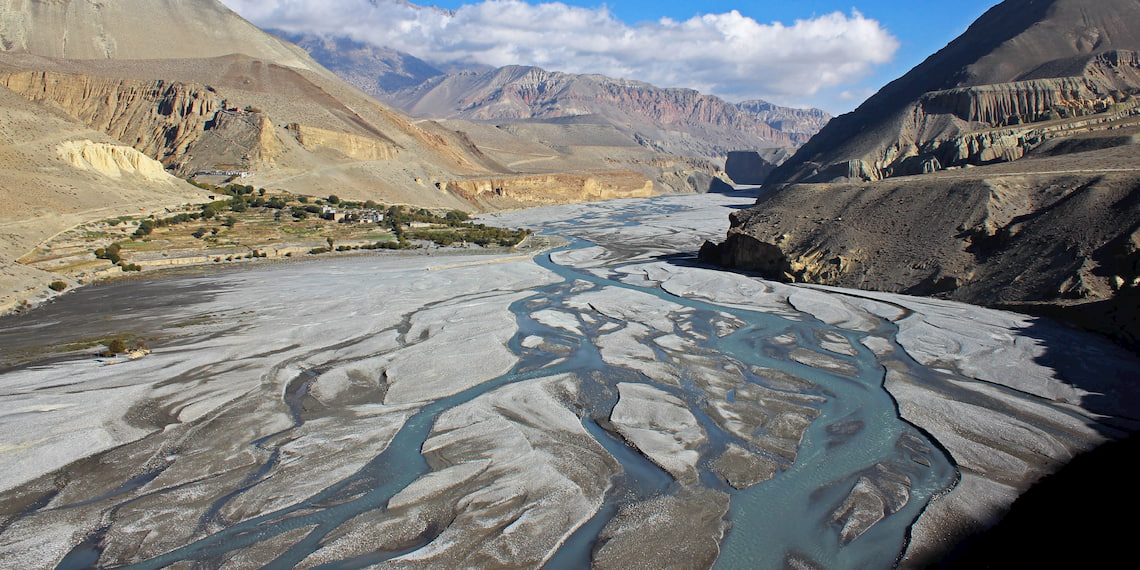 The Mustang a kingdom that is earned

Before leaving on a trek to Mustang, you must really understand what you can expect. To travel the Mustang, you must come prepared physically but above all mentally … The harshness of life, the biting cold and the living conditions extremely summary may put a few to the test. But the landscape’s beauty makes it an unforgettable moment.  For a long time shut out of the world whose only land access was walking or horse-back riding, the Mustang is far from modernity and comfort. Don’t expect to have a hot shower after a bitterly cold day or if by chance you find one, the room will surely be breezy as the windows don’t have glass panes… 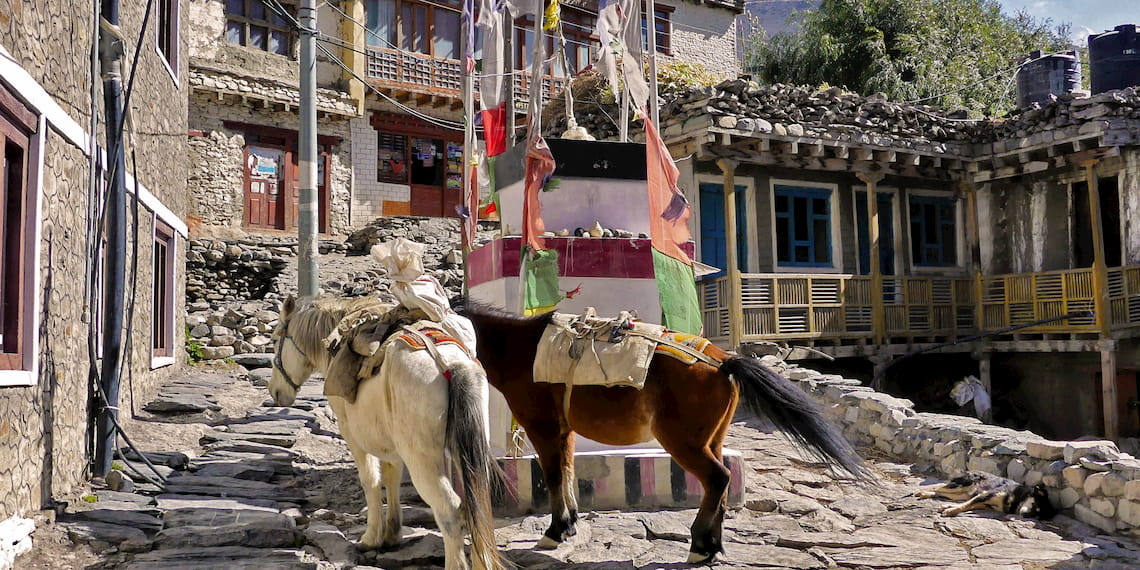 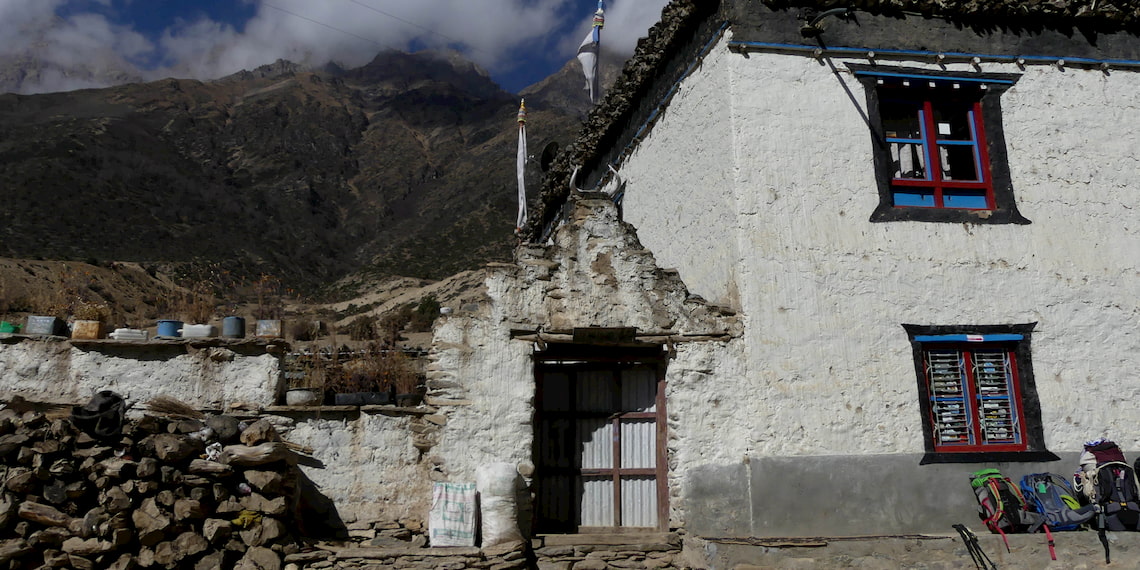 Journey to the kingdom of Mustang

On the second day, after crossing the doors of Kagbeni’s kingdom, I’m literally immersed into new scenery. The beauty of these grey-yellow desert peaks, the unique terrain shaped by erosion is amazing. Finally, opening up under my feet, emerges the authentic and legendary character of Mustang. This same day, I will discover that these unusual landscapes are well and truly shaped by the power of the elements. We will actually become accustomed to walking early in the morning for not having to walk a lot in the afternoon. Because in this part of the world, after noon, the wind starts to rises and dust flies. It’s impressive as the wind blows in this valley and I have to breathe underneath a scarf to avoid eating this dusty earth gone with the wind. 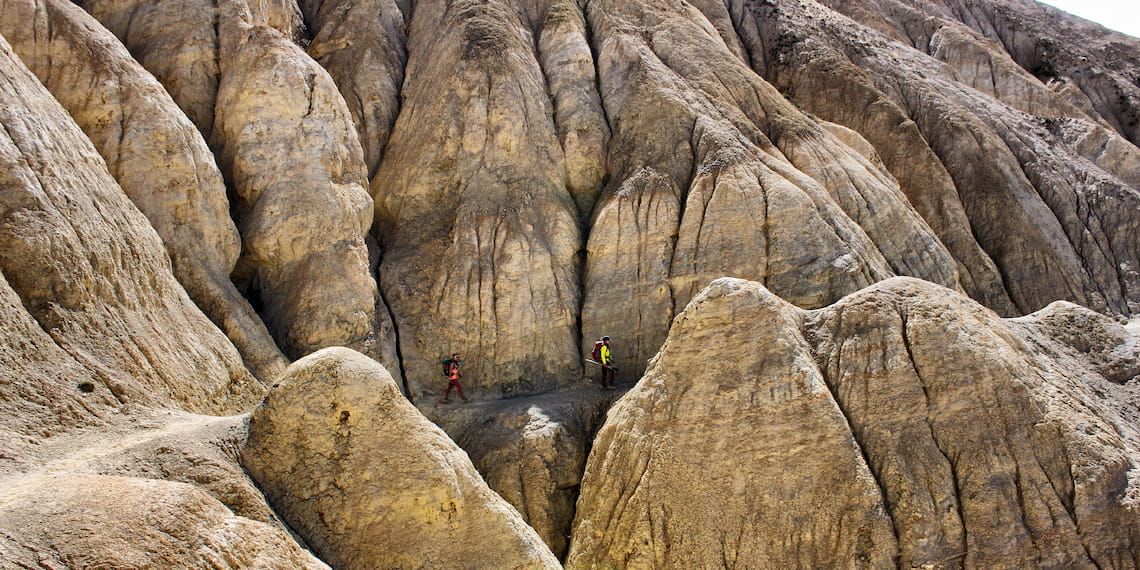 The wind rises and the dust flies… the sun is burning but the shadow is icy. I can only hold my breath just to look at in light of such a sight. The infinite beauty of these landscapes would have an untold lasting impact on my memory.

Extract from my travel diary 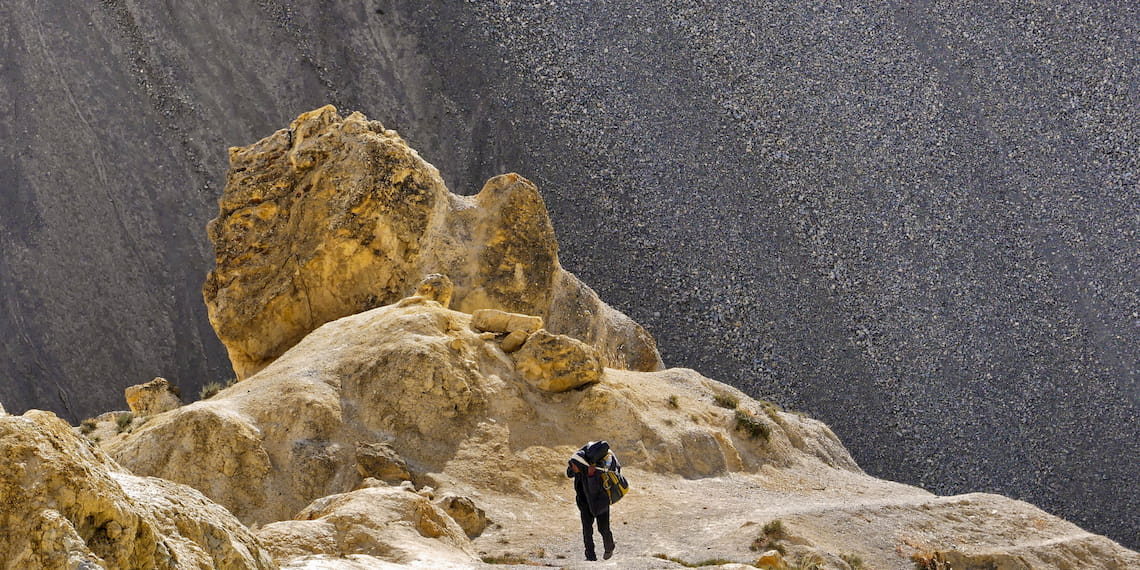 Trek in Mustang:  a breathtaking beauty

New day, new surroundings. We never cease to discover new landscapes, here one day follows another but no two are alike. After the yellow and grey ochre, the red shows up followed by the pink, blue and violet colours… The fourth day of the trek will remain one of the most beautiful to my taste.

Today we are connecting from Geling to Charang and the mountains never stop to amaze me.  We will cross two mountain passes at 4000 meters high and will eat in one of the most beautiful villages, Ghémi. After lunch, we start again heading for the red cliffs. We would think that these cliffs were hand-painted as all this seems unbelievable. Here we have an answer to a mystery. According to legend, the Mustang was once a region populated by demons. But one day, the protector went down from Tibet in order to kill them all and thus releasing the kingdom from their grip. Therefore the demons’ blood overlies these cliffs. 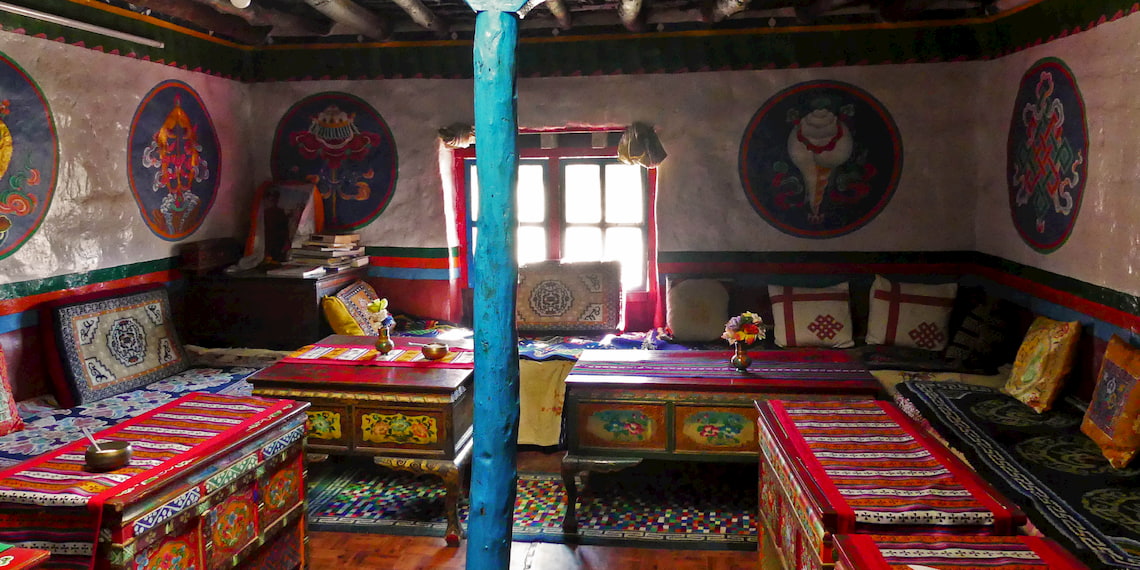 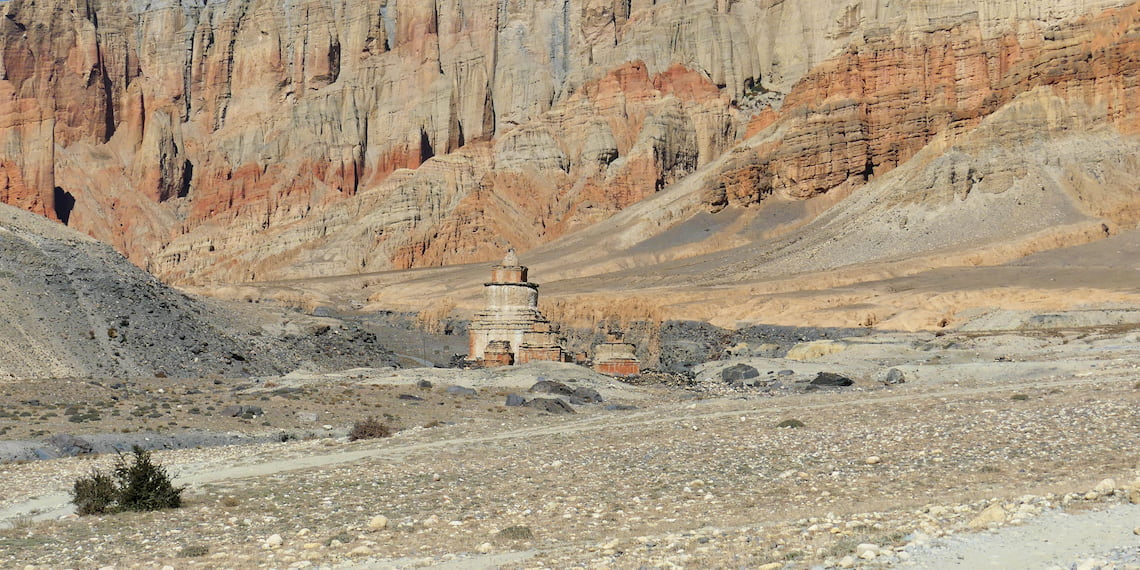 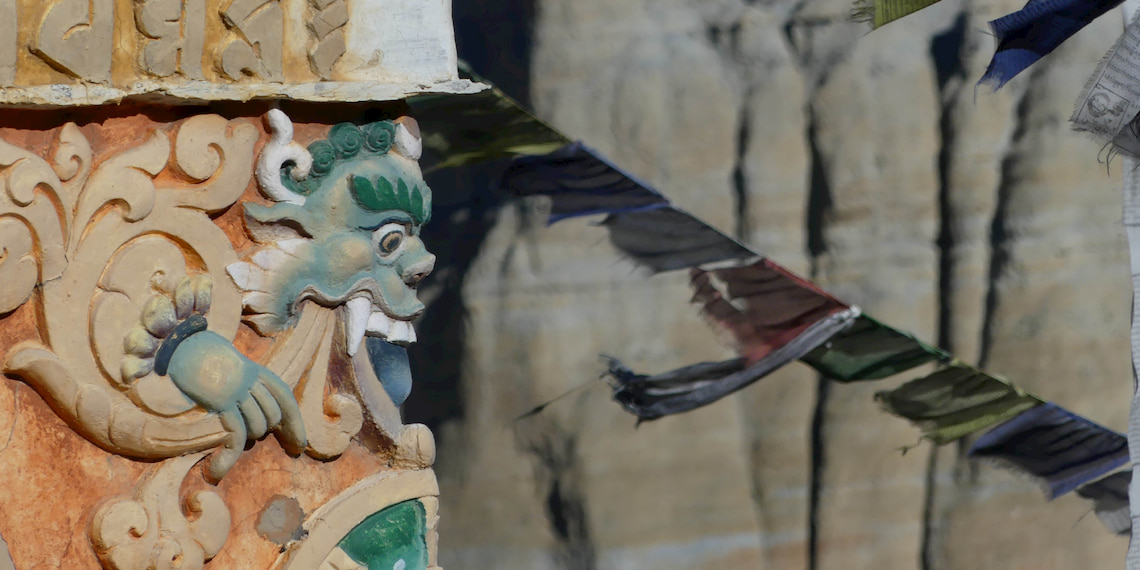 After walking for many hours in desert landscapes with red and pink ochre eroded cliffs with thousand of forms, the glimpse of a village is each time a marvel. Such as an oasis in the middle of the desert, we can see life arising in all the cultivated fields, for the greatest happiness of our eyes. It seems unbelievable to be able to cultivate anything in such isolated places. Only an ingenious way of channels capturing water from the river upstream allows cereal grain farming. This self-sufficient lifestyle where the cultures gathered around the village turns up to be the only food resource, I so admire. Here in Ghémi, we can even grow trees, a surreal vision of a forest in the middle of a desert. 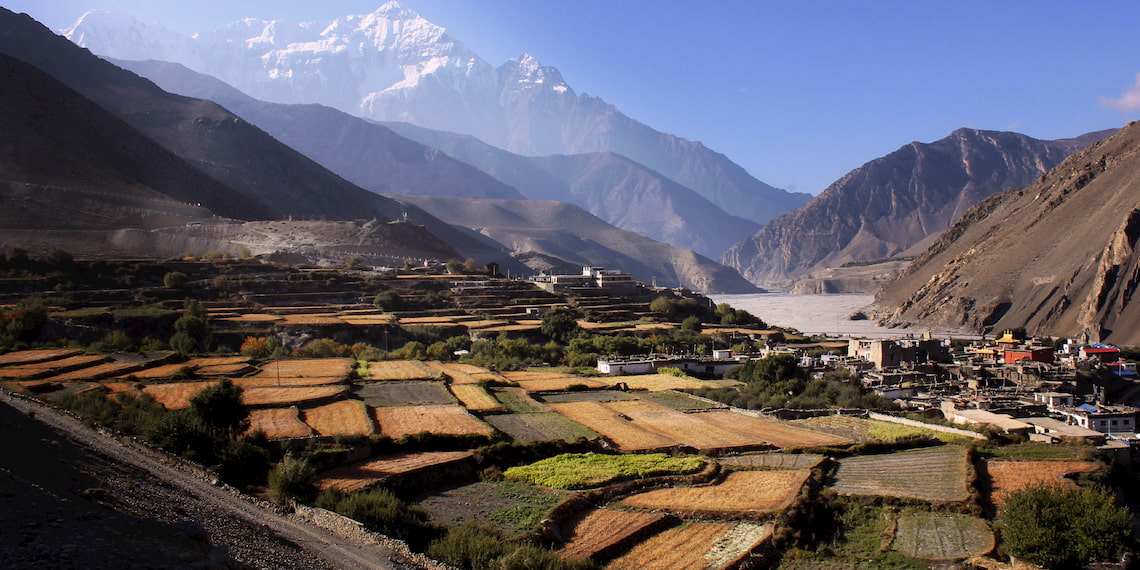 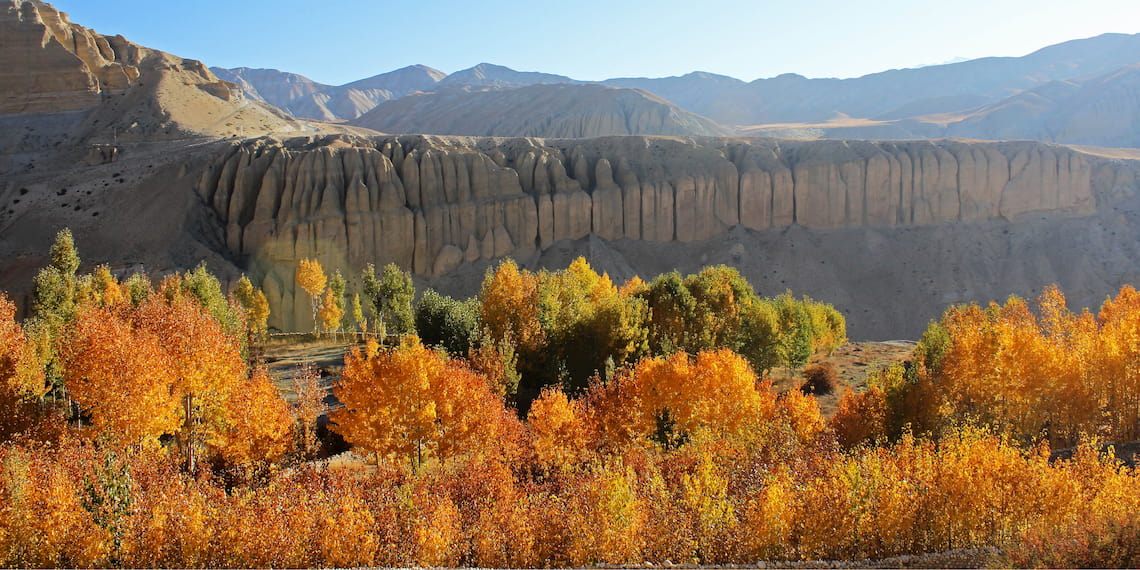 Trek in the Tibetan kingdom

The Tibetan culture has a significant presence in Mustang and throughout our journey we find a lot of carved stones with the famous sentence “Om Mani Padme Hum” as well as chortens and prayer wheels. The superstition wants them to be always by-passed on the left. The prayer wheels are composed of a cylinder filled with mantras which can freely rotate around an axis. According to the Tibetan beliefs, operating a prayer wheel has the same spiritual value than reciting the prayer of a mantra. By rotating it, it spreads thus in the air.

The inhabitants of this region also wear many Tibetan jewels including the famous Mâlâ.

The Mâlâ is a praying and meditating necklace which is worn for a thousand years by Buddhist, Hindu worshippers or people in search of spirituality. According to Tibetan tradition, they are made of Yaks bones inlaid with brass, turquoise and coral. 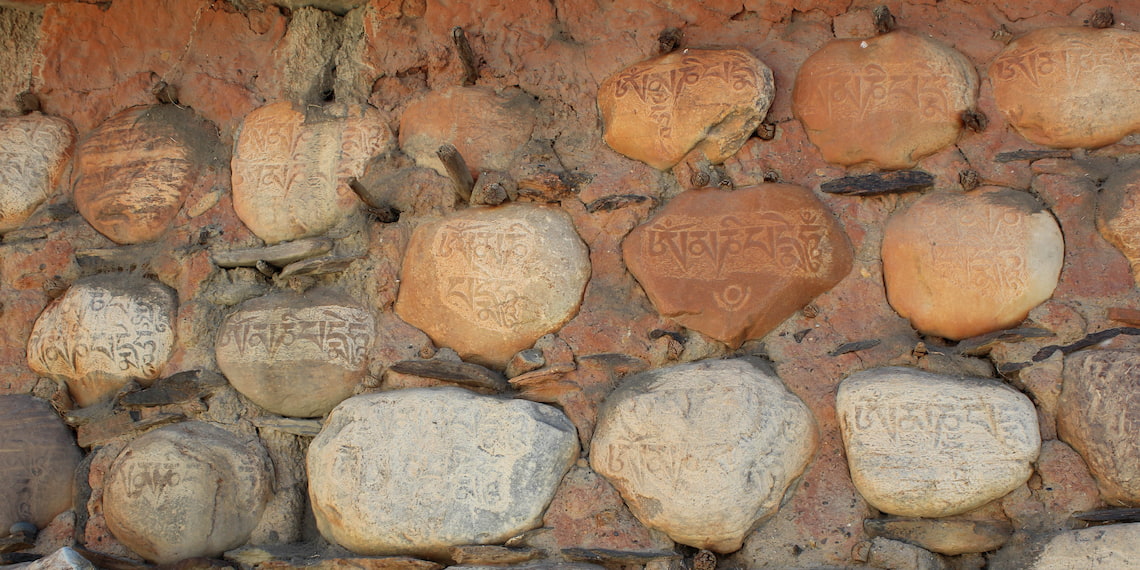 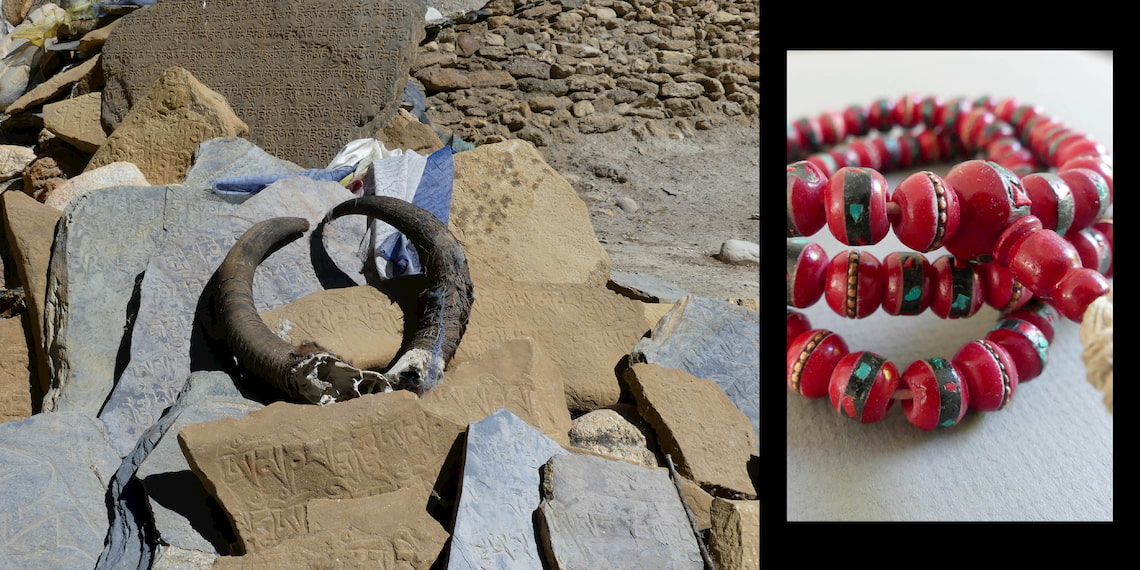 “Oh, dear Lo Manthang! ” The capital so much dreamed about by Sylvie… The one who was imagining, at last sleeping in a comfortable hotel with a bed and a hot shower… What fun to see the mark of disappointment and resignation on her face when approaching the Capital … As for us, we figured it out a long time ago that Lo Manthang was a capital only by name. How can you expect to find a “city” in this enclave? But we couldn’t resign ourselves to ruin her expectations. The capital populated by cows, horses and very brave villagers, is nevertheless, a truly enchanting place.

Extract from my travel diary 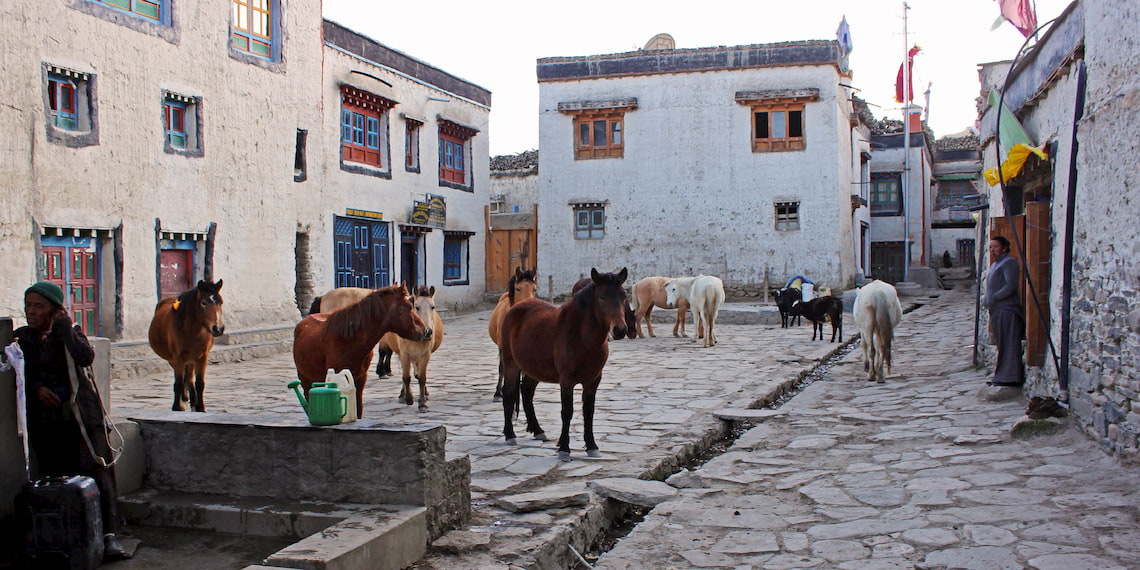 On the fifth day of the walk, we finally arrive at Lo Manthang, the northernmost point of our journey. From here, we have a view of the Tibetan mountains. The immensity of this mountain ocean is breathtaking. Down below, the soul of Lo Manthang vibrates in its narrow alleys. We feel here that time deeply marked blend of spirituality and mysticism. The narrow streets are full of monasteries from a bygone era where dilapidated facades hide a priceless treasure. Paintings and sculptures which decorate them have gone through the ages in total secrecy to our delight! 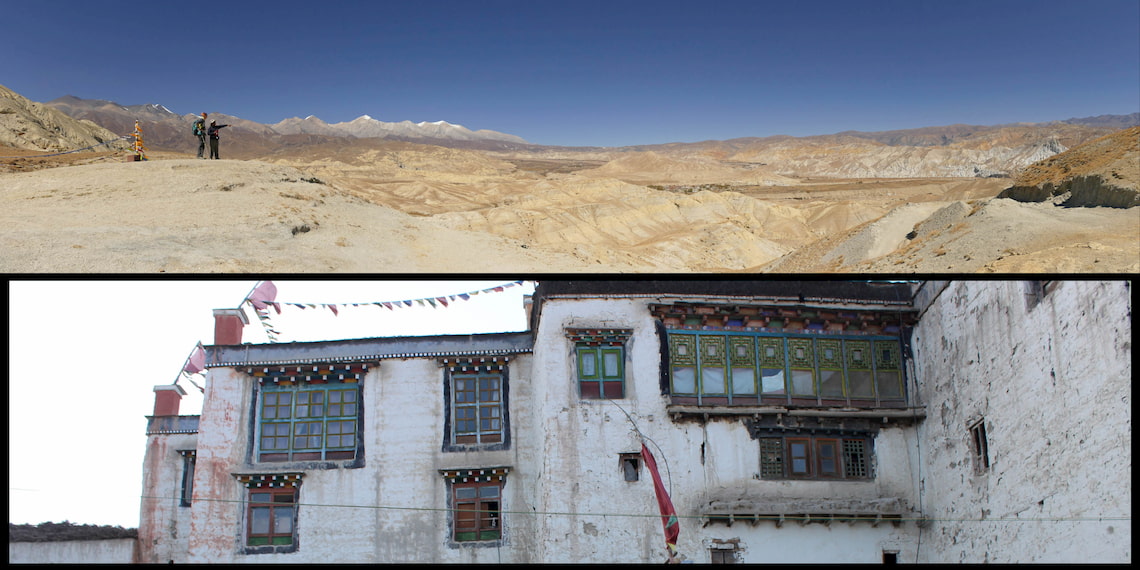 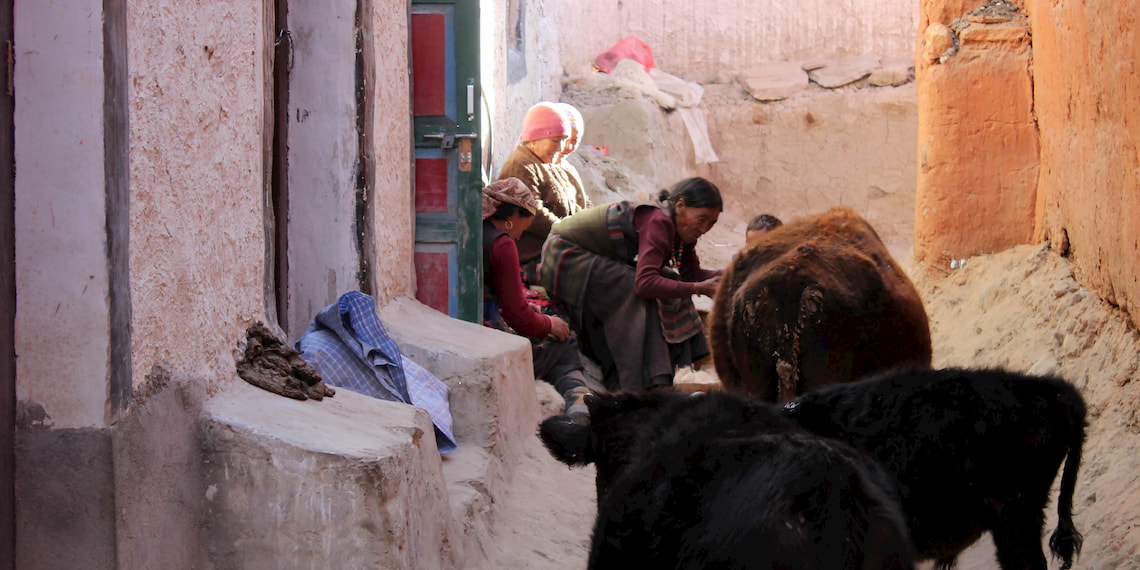 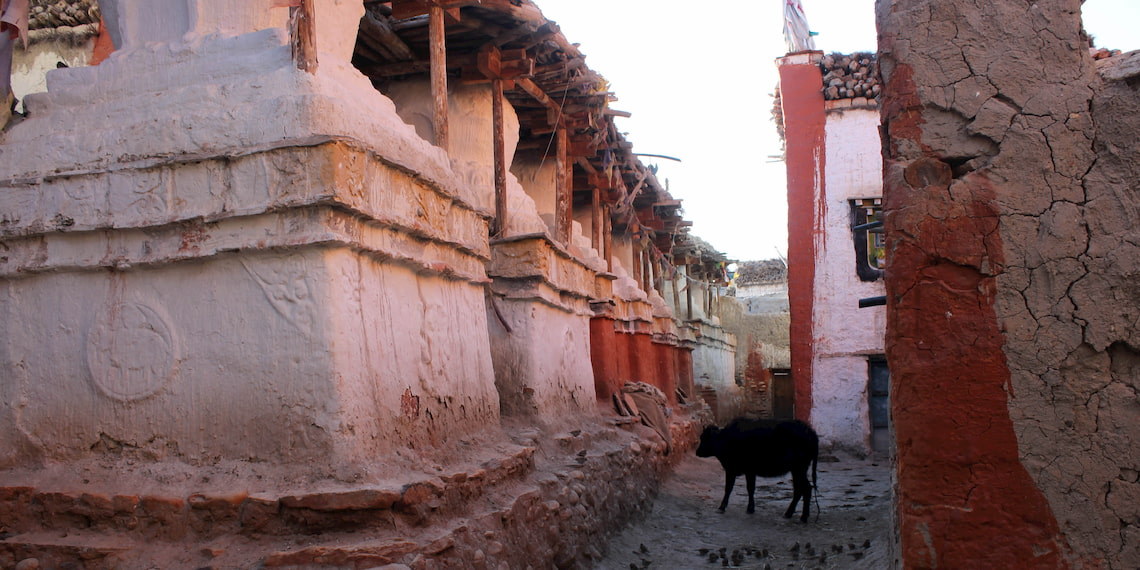 Throughout the pathway, we can clearly see openings in the cliffs. We could initially take them for natural caves but their concentration and clustering around the villages may make you think otherwise. It turns out that, even today, they remain a mystery for archaeologists.

The climber Pete Athans discovered them for the first time in 1981 and ensured that they were unreachable. It shows how isolated these places are, even for this experienced adventurer who climbed Mount Everest eight times.  the early 90s, archaeologists discovered 3 000 year old bodies, but they can’t solve the mystery of these caves pierced in the very heart of the mountain. We assume that they were dug with the help of ropes, scaffoldings or perhaps even stone-cut steps. Time has erased all traces of that distant era. 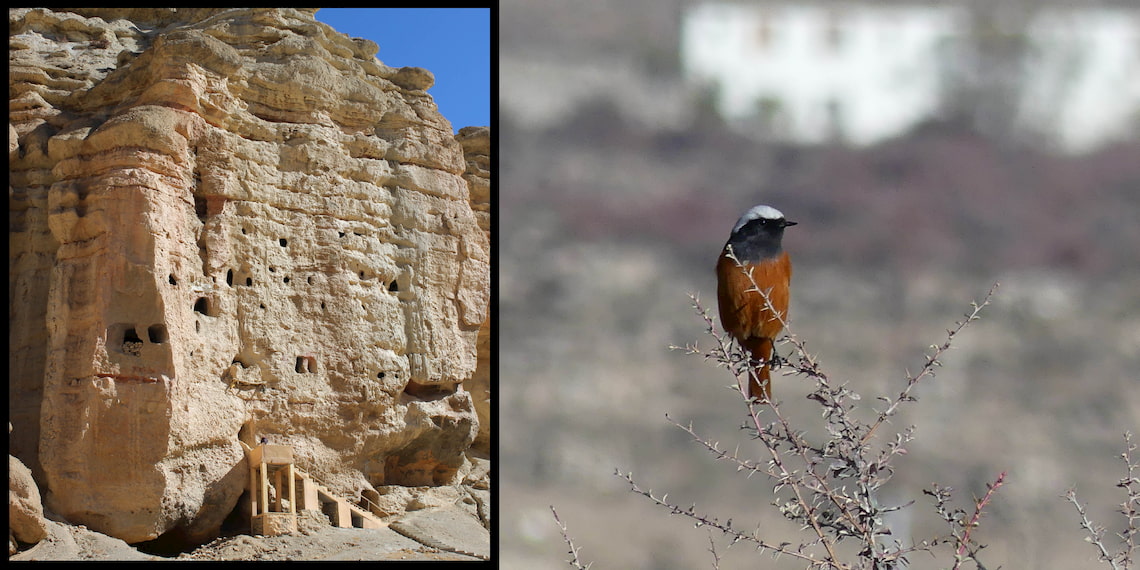 On the opposite bank of Kali Gandaki, the rock becomes darker, more mineral than ever and the isolation of the villages reaches its climax. Only the herds of pashminas passing through bring life to the lunar environment at the same time both sinister and fascinating. 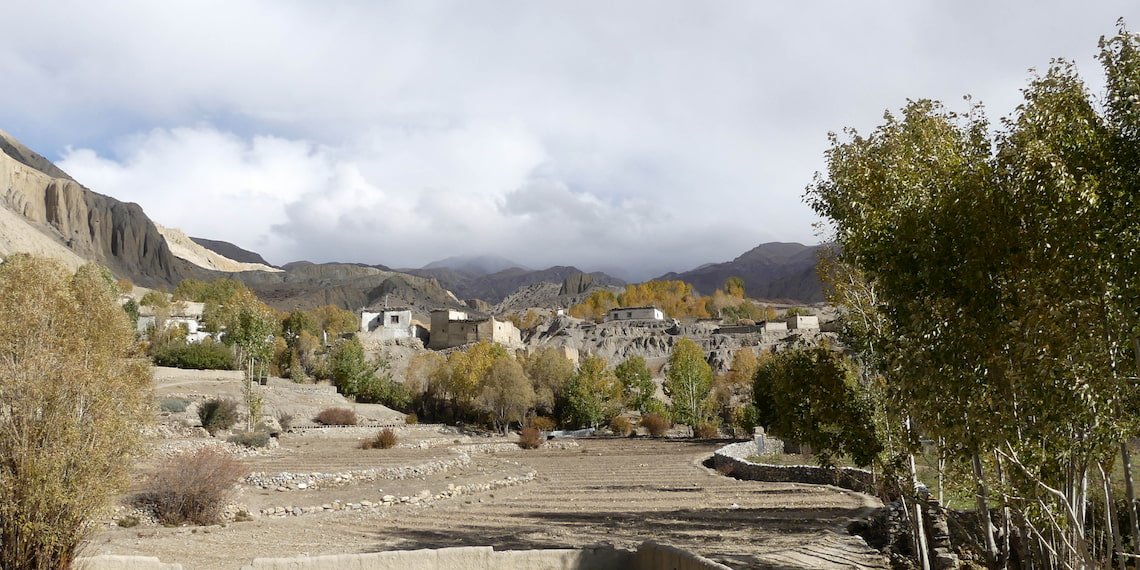 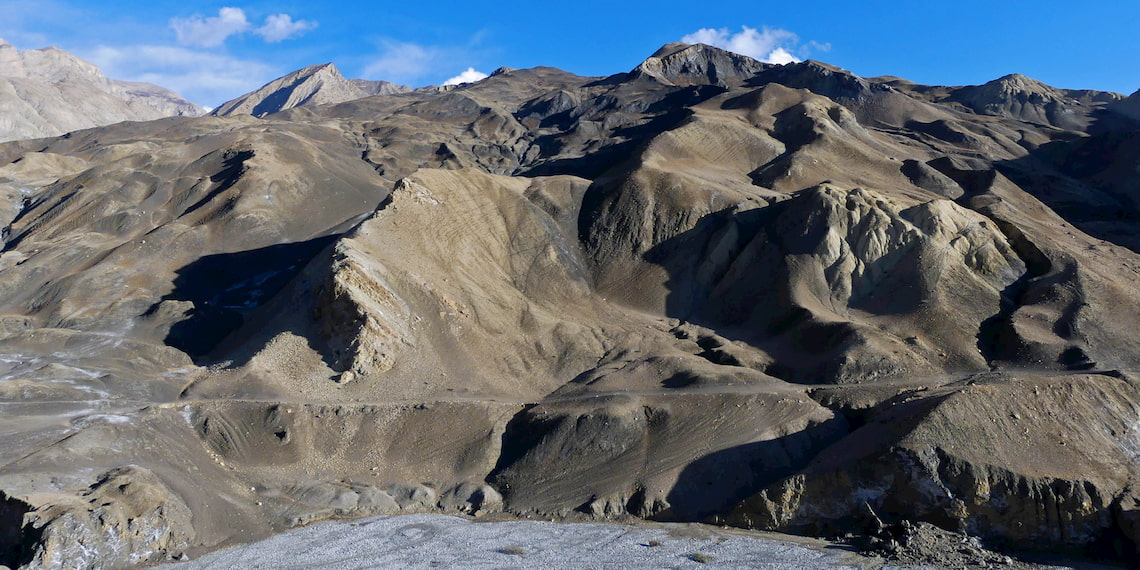 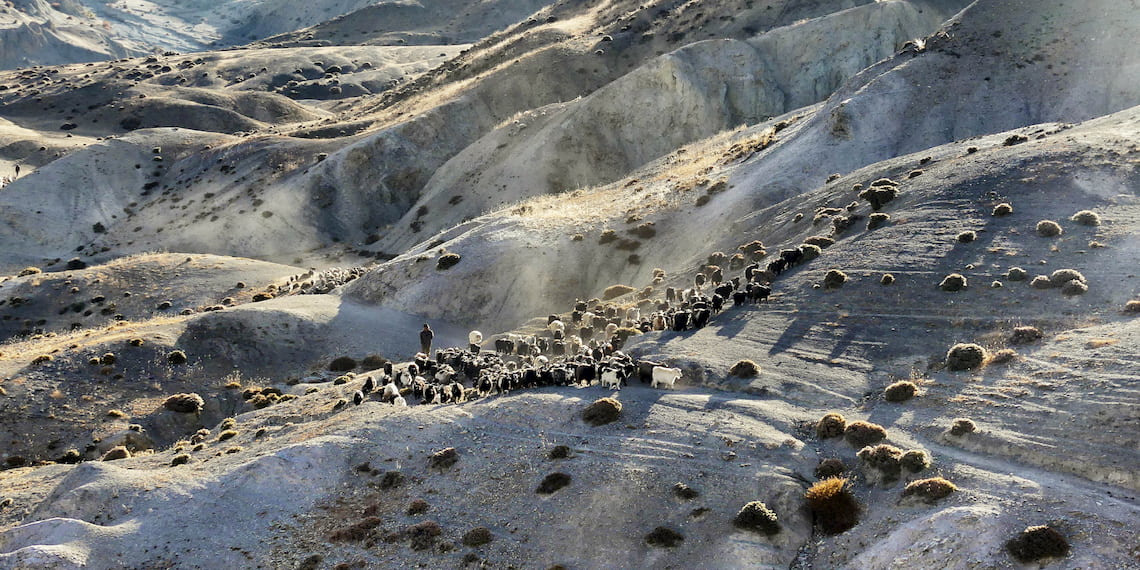 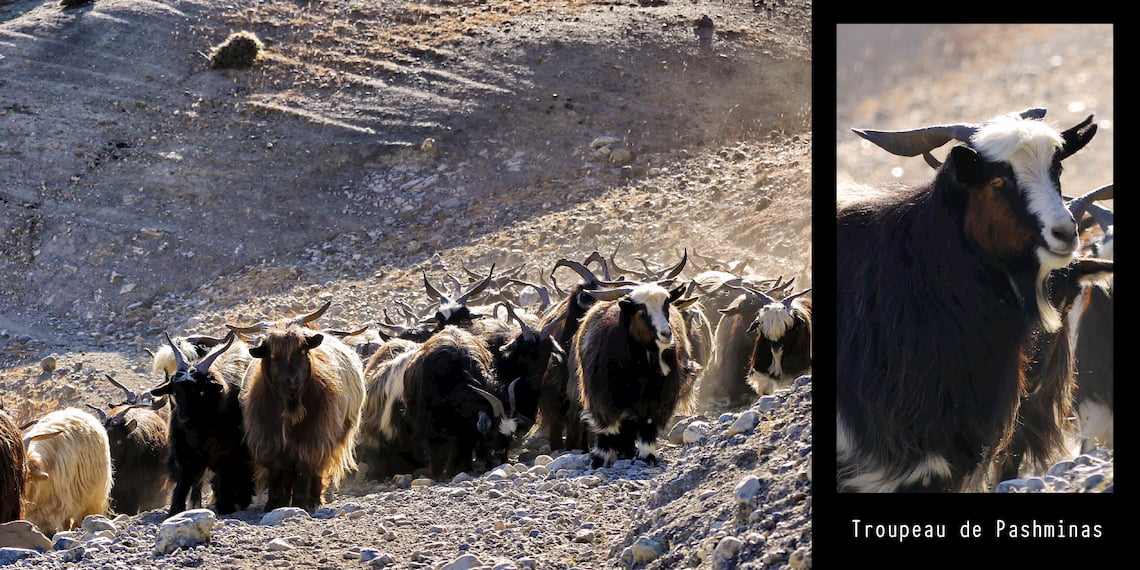 On the tenth day of the walk, we are so isolated that we will have to walk no less than nine and a half hours to relay another village. Endless views of ochre and rose peaks that inhabit the whole space.  We thought we had seen all the possible shapes and colours. We are once again surprised. 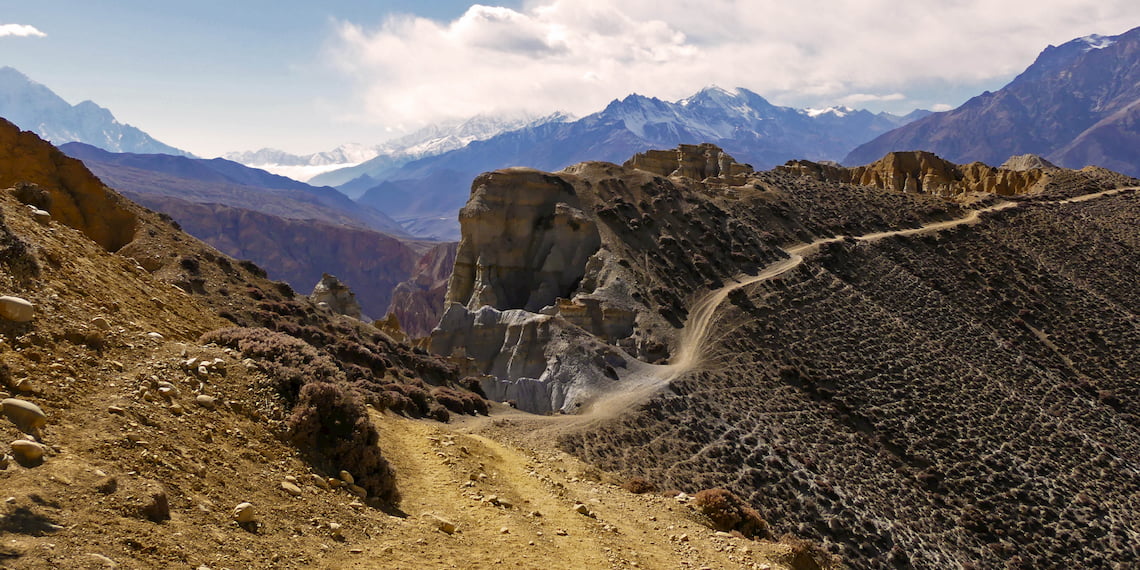 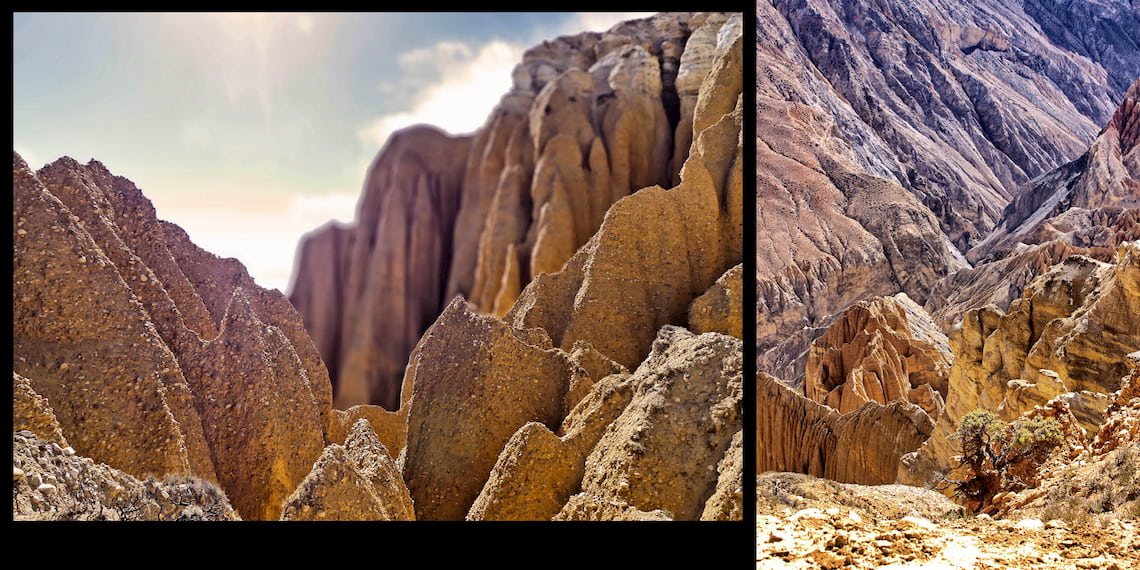